How to connect football clubs and esports teams

END_OF_DOCUMENT_TOKEN_TO_BE_REPLACED

Every week it seems a new football club is investing in its own branded esports team and this August is no exception, as clubs race to establish esports teams before the next version of FIFA is released in September. The snowball effect began in 2015, when VfL Wolfsburg entered the stage with the first FIFA player ever representing a traditional sports team. In the last week, Wolverhampton Wanderers  became the latest to launch a clan. Infront's partner SV Werder Bremen also recently began their esports journey with STARK eSports at the recent FIFA eWorld Cup as MoAubameyang topped his group before going out at the quarter-final stage of the biggest FIFA esports event we have ever seen.

I have spoken before about how esports are impacting the market despite being at an early stage in their growth cycle. More shrewd organisations – including the likes of PSG, Manchester City and many American franchises – have recognised that esports can complement classic sport in a variety of ways.

If you look away from football and towards F1, McLaren's esports competition is a good example of positive tangible results, with the winner becoming the team's official simulator driver. Ben Payne, McLaren's Director of Esports, even highlighted how the skills can be interchangeable, adding that they "are transferable to the real world."

Much was also made of this aspect when some of the world's most knowledgeable minds on the sector met in Lausanne for the IOC esports summit in July. Of course, sports simulations will have an impact on whether esports is in the Olympics – no doubt about that.

Last week the Esports Observer released their Esports Business Digest, which reported that over $427m in capital was raised within the ecosystem over the course of Q2 2018. This was the second best performance for the industry when measured by the amount raised in the last four years. And keep in mind we are talking about esports – with traditional games such as League of Legends and CS:GO forming the biggest part of the iceberg and sports simulations remaining pretty much untouched.

In short, the popularity of esports is booming and does not look like it is slowing down.

This growth has attracted interest from clubs looking to cash in on the sector. However a lot of the time they are looking at how quickly they can make money from esports rather than recognising where the true value lies: brand building as a foundation before layering new elements on top.

If a club's first questions are "how much can we earn from esports and when do we earn it?" they are investing for all the wrong reasons. The demographic consuming esports is a lucrative one, but simply throwing money at it and expecting a return is not good business practice, just as it would not be in classical business. Esports is a micro example of a macro trend in the marketing industry. Simply having an esports team will not attract sponsors.

The way to make the link is to truly connect the club and all its assets with the esports team. This can even be achieved away from the traditional footholds of FIFA, with some clubs branching out into League of Legends, DOTA 2 and CS:GO teams.

Other methods to merge esport teams to the wider club include creating dedicated facilities, fostering relationships with the playing squad as well as current sponsors and a making a concerted effort to combine traditional football merchandising with esports merchandising.

There is also an opportunity to incorporate corporate social responsibility, using esports as a way to show fans how there are now multiple routes to represent a football club. VfB Stuttgart's latest team announcement is a great example of that with Niklas Luginsland stepping up to the clan for this season. Utilising esports as both a local and global driver can also be an aim if the right methodology is in place.

Going beyond a simple football clone

The failure to effectively connect a football club to an esports team often comes from an outdated understanding of implementation. There is nothing wrong with that; this is a new market and many stakeholders are still in a practitioner phase of establishing the most effective methods.

With that said, there are still a lot of areas of marketing that are being under-used. Even with the best and brightest digital advertising teams if you are not – as my colleague Christoph Heimes often mentions – fishing where the fish are, the impact you make and the engagement you have will be minimal. With the right strategy, you can enter esports and take all the opportunities the digital world offers you, transferring quality into and out of customer data.

It is a different world, and to market successfully within esports you need to be able to adapt quickly to the whims of the consumer.

In short, being slow in a fast moving environment means you will be left behind.

If you are interested in discussing more, contact us on info@infrontsports.com or connect with me on LinkedIn. Happy to hear your thoughts. 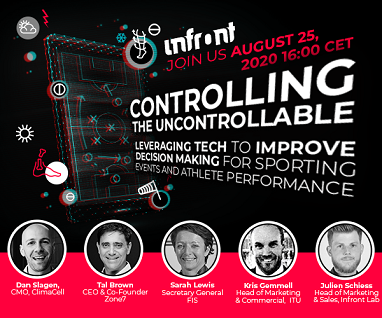